Backed by over 100 years of innovation, our multi-award winning products provide better acceleration, better fuel efficiency and better value with features that are unique to Suzuki Marine. That’s boating made better.

Thanks to Suzuki's Lean Burn fuel technology, you'll be on the water for longer...

Here at Suzuki Marine we know that technological improvements are what set us apart from our competitors, which is why we've been at the forefront of innovation and design for over 100 years. Driven by this passion, as well as the signficant factor of the continual rising costs of fuel, our engineers developed and introduced the Lean Burn Control System fuel techology.

What exactly is Lean Burn?

Lean Burn delivers better fuel efficiency and greater fuel savings by predicting fuel needs, so that you get even more out of every drop.

Unlike the technology found in our competitors' products, the benefits of Lean Burn are delivered over a wide operating range, providing significant improvements in fuel economy – reductions up to 45% in some cases.

Lean Burn works by using real-time computer processes and sensors to optimise fuel delivery by predicting fuel needs according to operating conditions. It delivers a precise mixture of fuel to the outboard allowing it to run on a more efficient fuel mixture through the use of a lean air-fuel ratio.

This achieves remarkable improvements in fuel consumption ensuring less trips to the bowser and more savings for you.

First introduced on the DF70A/80A/90A in 2008 to great acclaim, Lean Burn continues to be an important feature in all of our new release outboards. It's available across the “A” series outboards in our Portable, Midrange and High Performance ranges and the DF100B.

Combined with other Suzuki technologies, Lean Burn can deliver the optimum fuel/air mixture to the outboard and is designed to save fuel both at low speeds and up into the cruising range, making fuel efficient outboards even more economical.

In-house testing shows that while cruising, the DF300AP is 14% more economical than the original non-Lean Burn DF300, without sacrificing any power of the original DF300.

*Fuel saving percentages across our entire range of “A” and “TG” Series engines.

When it comes to speed,
we often say “give it a bit more”.

With Suzuki Marine’s offset driveshaft
you can do just that!

We pioneered the use of the offset driveshaft which helps to evenly distribute weight, by reducing the size of the outboard motor.

Found on all models from DF70A and up (Midrange  to  High Performance  engines), the offset driveshaft positions the crankshaft in front of the driveshaft which moves its centre of gravity forward for more even weight distribution to provide an increase in power, performance and balance, while also minimising vibration.

By enabling the outboard to spin a larger diameter propeller at a higher pitch, the system delivers powerful torque for better acceleration and greater top end speed (up to 2.59:1 gear ratio), at any given RPM. 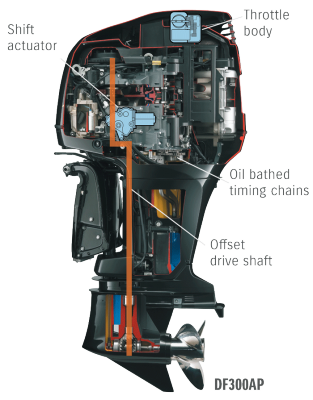 Maintenance-free timing chains in our range of DF40A and above (Midrange and High Performance engines) means no belt adjustment and no maintenance during the life of the engine.

Timing chains are the devices that make the connection between the crankshaft and camshafts and are located below the powerhead on a Suzuki outboard.

The self-tensioning, oil-bathed timing chains found exclusively in Suzuki’s 4-stroke outboards reduce noise and improve durability for dependable and quiet operation. The hydraulic chain tensioner automatically adjusts the chain as required, meaning there is zero maintenance required on the chain, EVER!

This reduces your servicing costs over time, providing you better value compared to other outboard brands.

The Suzuki Troll Mode System gives boaters very fine control over engine speed at low revs and is available across a range of 4-stroke outboards (note: does not come standard on all models). The revs can be adjusted in 50RPM intervals when the system is engaged.

The Suzuki Troll Mode System is easy to use and comes complete with a specific tachometer and independent control switch which can be mounted nearly anywhere on the console. It can be used with new ‘dual scale’ analogue gauges and multi-function gauges.

Conventional control systems use mechanical cables to activate the throttle. With Suzuki Precision Control (SPC), a computer sends signals to the engine electronically by wire, eliminating friction and making shifting easier and smoother. Plus, the system processes and transmits commands in real time to actuators in the engine, delivering precise, instant throttle responses for greater control and accuracy. It also has bulit-in features to help protect the engine and drive from damage so you can enjoy your boating life to the fullest.

It is most evident in the low RPM range and when maneouvering around the marina and in close quarters. The system is configurable for single, twin, triple, or quad installations, and for dual stations.

All models with SPC can also be fitted with the Suzuki Precision Manoeuvring joystick control system to offer you a seamless driving experience, particularly when docking. Find out more about the SPM joystick system.

Suzuki's Dual Louver System is a new feature found on the flagship DF350A and the DF325A, released in 2017. These outboards are equipped with a dual louver system at the air intake to remove water from the air taken in to the cowl. These outboards also incorporates a direct intake system which contributes to a higher engine output.

Found on the DF350A and DF325A, the Suzuki Dual Prop System (also known as the contra-rotating propellers), is a revolution in innovation and efficiently turns maximum horsepower output into propulsion under water.

With a total of six blades (three blades on each prop) the Dual Prop System provides more grip and propulsion to evenly distribute torque between each prop. Coupled with the hydrodynamic gear case, the result is greater outboard efficiency and performance.

As each propeller rotates in a different direction, exceptional stability is achieved.

Other features of the Suzuki Dual Prop System include:

This is achieved because the gear diameter can be reduced since the counter rotation propellers can disperse torque. It cuts down water resistance and increases speed.

The Suzuki Dual Prop System spreads the propeller load for better efficiency at low speeds, especially when docking or trolling. It also improves handling and turning at high speeds.

This enables a boat to reduce the speed and stop quicker due to twin counter-rotating propellers.

The Suzuki Dual Prop System enables a boat to run straight and track true, eliminating the lateral forces associated with a single propeller.

The DF60AV is a high thrust version of the standard DF60A model which features Suzuki’s High Energy Rotation system.

It is equipped with a lower unit, based on that found on the DF140A, specially engineered with a large 2.42 gear ratio that turns a bigger 14-inch prop. The system delivers a 42% increase in forward thrust and 136% in reverse, providing the propulsion you need for moving heavy boats.*

*Thrust was statically measured using a stationary test boat running forward at 3,500rpm and reverse at 3,200rpm.
Data was obtained through in-house testing under uniformed conditions.

Suzuki protects the outboard’s exterior from harmful corrosion with its own specially formulated anti-corrosion finish.

Our anti-corrosion finish is applied directly to the aluminium surface of each outboard. This maximises the bond between the finish and surface to provide a lasting defence against the corrosive effect salt water can have to parts that are constantly exposed to saltwater and other harmful elements.

Suzuki’s multi-function tiller is ergonomically designed, making it easier to use and grasp.

A troll mode switch has also been added for users to take advantage of Suzuki’s Troll Mode System. A digital tachometer is also included which includes night mode and provides engine management data at the touch of a button.

Suzuki’s multi-stage induction technology allows for optimal air flow during both high and low-speed operation by utilising two intake manifold pipes per cylinder. This ensures the engine gets the right amount of air – at low rpm, air enters the combustion chamber through a longer, curved manifold pipe designed to improve combustion and boost low-end torque.

As rpm increases, the valves open on the direct intake pipes which allow a greater volume of air into the chamber, increasing the engine’s ability to breathe efficiently, resulting in higher power output during high-speed operation.

If you have a large boat with two or more outboards, you generally need to pair a standard rotation outboard with a counter rotation model. The ground-breaking Selective Rotation technology instead allows our outboards to be configured for either regular or counter rotation (anti-clockwise) operation, for vessels equipped with multiple engines.

Our Suzuki Selective Rotation system allows you to select the rotation direction on any Suzuki outboard. So instead of buying a dedicated counter rotation model, all you need is a standard outboard, a suitable propeller, and our simple Selective Rotation Connector.

Suzuki’s outboards which feature the offset driveshaft (70hp and up), also incorporate two-stage gear reduction designed to take maximum advantage of the power produced by these high performance engines.

*These reduction gear ratios are the largest in each class.

Variable Valve Timing is utilised on a number of Suzuki’s outboards to deliver exceptionally high performance across the outboard’s full operating range, while retaining the benefits that 4-stroke technology provides.

Variable Valve Timing is used to vary intake timing with the camshaft to optimise timing for low to mid-range operation. This allows the engine to deliver maximum power output across its entire operating range, producing greater low to mid-range torque, for powerful acceleration. The entire process happens automatically leaving you to enjoy the power and performance.

Suzuki engineers did an incredible job designing this system without adding unnecessary bulk or weight to the outboard. System components, which include an inline high-pressure fuel pump, throttle body, fuel cooler, vapour separator, and fuel injector, are redesigned scaled-down versions of those found in our high-end outboards.

The system operates battery-less, another industry-wide first in class, delivering quicker starts, smoother running performance, and more acceleration in all conditions, without the need for battery power.

Suzuki Marine’s range of outboards utilise a number of its advanced technologies to deliver cleaner, more efficient operation that conforms to the Recreational Craft Directive (RCD) – Directive 2003/44EC of the European Parliament and of the Council, and has received three-star ratings from the California Air Resources Board (CARB).

Engine noise on large boats can make it difficult to relax and enjoy your time on the water. Suzuki outboards run unbelievably quiet, so much so that some users have thought their outboard was actually switched off. They may be exaggerating, but Suzuki outboards have long been noted for their quiet operation. Suzuki’s engineers go to great lengths to incorporate methods and technologies designed to keep outboard operation as quiet as possible.

For example, the DF200AP/DF200A/DF175AP/DF150AP models are fitted with a resonator on the intake manifold. Often overlooked as a noise source, air sucked into the intake manifold at high velocities can generate a harsh noise. Adding the resonator reduces such noise, keeping operation exceptionally quiet.

Available on models DF60A and above.

To protect the boat and motor from damage that can occur when tilting the motor, the trim and tilt model outboards incorporate a user adjustable tilt limit switch that prevents it from tilting beyond a predetermined point.